By the way, I LOVE reading the comments you all are leaving on BATF’s latest giveaway so keep them coming!

One of you asked about shower heads. It’s funny you ask, because being a reality show junkie to a point of fault, I used to love watching celeb hairstylist Jonathon Antin‘s show on Bravo, Blow Out [Interesting sidenote: he’s the brother of The Pussycat Dolls founder, Robin Antin…I didn’t know that while I was watching the show, and it blew my mind when I found out. Not sure why].

Anyway, I promise this all has a point.

During the show, you see Jonathan’s journey to coming up with his whole Jonathan Product line, and one of them is a shower head. His water wasn’t running one day when he was trying to get ready for work, so in a rush, he just grabs a bunch of water bottles and washes his hair with them. The rest of the day, he noticed how nice and soft his hair was, and he realized it was probably because he used clean, filtered water to wash it with. So, he came up with his Beauty Water Shower Purification System, $95 which is basically a shower head + filter.

After watching the show, I was intrigued and REALLY wanted it, and long story short, I got it and fixated it in my apartment shower. I was super excited, and initially it felt like it made a slight difference. Though that feeling didn’t stay for long and honestly I think it just made me feel better psychologically. I can’t imagine other filters not making any sort of difference whatsoever, but keep in mind you’ll have to be vigilant about changing the filter, and with the Jonathan shower head for example, that’s another $55 each time you do. I personally think it’s more important (and maybe even easier) to just get a clarifying shampoo, unless your shower head is really that old and rusty.

Here are few shampoos I suggest looking into: 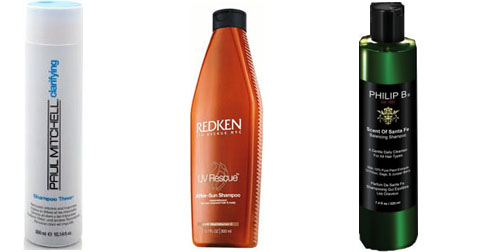 ($11.95) which removes chlorine and other impurities.

($29) with sage, coconut extract, and henna. I’m using it now, it’s very light and natural and my hair feels shiny and cleannn.

Have any of you had a different experiences by changing shower heads? Or do you have any other favorite clarifying shampoos?