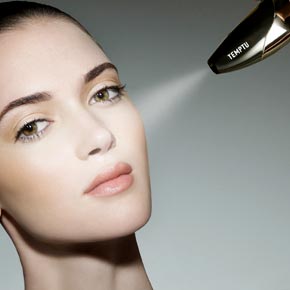 Alright beauty insiders, if you haven’t already heard the buzz about TEMPTU — the at home airbrush makeup system — then you may have been living under a rock. The line was formerly a strictly professional line which launched in 1981 and is now available to consumers for the very first time.

I went to a launch event TEMPTU with the makers, and here are some of my notes!

When I first walked in, they had stations set up with makeup artists where you can get you airbrush done. Naturally, I though this meant they would apply the makeup on me. But when I walked up to one station, the makeup artist asked that I just give it a go. Mind you, I’ve never used, nor have had airbrush makeup applied to me, so to say I was a bit intimidated is an understatement. 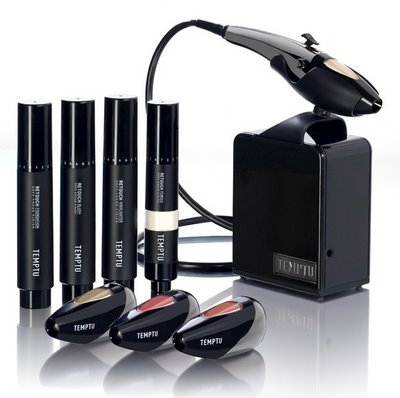 The Temptu system comes with a small black air compressor that’s connected to the actual air brush, a pen-like wand. You attach an individual Air Pod of your matching foundation (which is basically a pre-filled pod of foundation) to the tip and you’re ready to go. The Air Pod is great because you won’t have to keep refilling, and each lasts 1-2 months with regular use.

The compressor also has air settings, so you can control how much air is coming out, hence how much coverage you want (from light to heavy). Additionally, the air brush itself has a small lever which you pull back on with your finger to start applying the makeup. The further back you pull, the more makeup comes out.

Under the makeup artist’s direction, I started applying and made a novice mistake — I held it too close to my face and was spreading it in tiny circles which leads to an uneven application. I tried again, and this time a little farther away and in moving circles. The second time was a charm.

I would say the only thing to get used to is that since the color matches your skin so well, it’s hard to even see it going on. But very little goes a long way, and the end result (should be, if applied correctly) a super smooth, even finish. It was gorgeous actually. 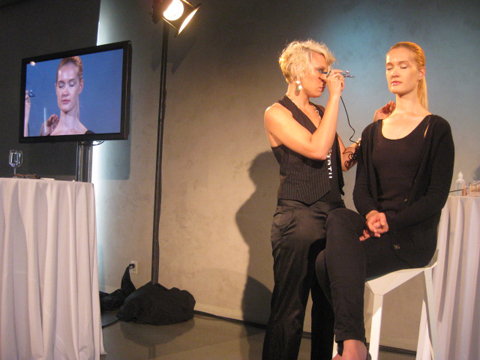 Next, they had a live demo of a professional makeup artist airbrushing a model next to two HD TVs so the audience could see the difference. It’s a very gradual change, but you could not even tell she was wearing any makeup in the end.

A breakdown of Temptu’s features:

Click HERE to buy or check it out further at Sephora.

Is it for you?
The obvious point is that this is a pricey toy to have. It’s best for makeup aficionados, artists, or people who are constantly out and about. You also may want to look into it if traditional liquid or powder foundations are just not cutting it, since I found the color match to be amazing. Unless you wear makeup everyday, I’m sure it will last you well beyond 2 months. And you have to shell out $225 just once, and build on your collection for a fraction of the price after that.

I’m going to do two more parts to this write up: I will also review my first stab at Luminess Air, another FANTASTIC airbrush makeup kit. Part III will be a comparison of the two, and more on who really needs airbrush makeup.