I’ve been so excited to test out my new camera [it’s kinda like an SLR on training wheels…goodbye point-and-shoot, hellllo Canon G11]. The first restaurant I happen to use it at was Naya — a Lebanese restaurant in Midtown East.

OK. First of all, Weirdest Welcoming Award goes to Naya.
“How many tonight?”
“Two, please.”
“Do you have a reservation?”
[Looks at half-empty restaurant] “I mean….”
“Ok, I’ll see what I can do.”
[uncomfortable laugh* He’s probably trying to make a joke]
“This is all I have right now.” [points to a perfectly normal, empty table, sandwiched between two equally empty tables. The seriousness of his demeanor shows us he was in fact, not joking earlier]
“That’s…totally fine.”

I get that maybe they were booked up for later that night. But throughout our meal, the restaurant didn’t get full to capacity — at least as we expected it to after all the deliberation on where to seat us. I could at least appreciate the mod decor (tables are kind of aligned railroad-style since it’s a narrow space and separated by glass — everything else is mostly white).

But then, when we had trouble choosing between the appetizers, the waiter seemed more in a haste than to explain some of them further or give his preference. [“Would you recommend the grilled haloumi cheese plain or filled in the the toasted pita?” “If you like cheese, get the cheese…if you like pita, get the pita.”]. We decided to just go straight for the entrees after that awesome advice. 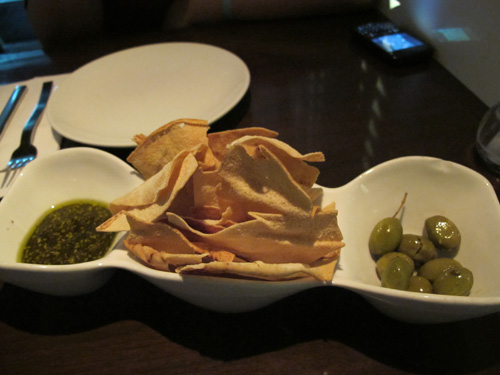 I know it seems like I’m bashing, but really, the service was awkward and a little stuck-up that day. The food made up for it mostly though. They started us off with fresh olives/oil and crispy papadums (above). We ordered chicken kabab and lamb dumplings in yogurt sauce.

The chicken kababs were delicious — not dry, tender, grilled, tasty meat. What made it over the top was the amazing garlic spread it comes with.

Your breathe might not be OK for the rest of the night but you will be so full and happy it won’t even matter. The lamb dumplings we picked on the fly, and it was a lot less exciting — almost tasteless in the yogurt sauce. If you go, you can skip this one.

Prices are a little more expensive (location probably accounts for this), but stick to the chicken kababs or shawarma sandwich with fries which I heard is equally delicious. Order in if you can…unless, they start making a concerted effort in improving the service after I left my comment card hehehe.