Recently, I had the pleasure of attending one of L.A.’s most exciting food events of the year–the American Wine & Food Festival. It’s confusing to me why Los Angeles has so many different food festivals, so I’ve chosen to reserve our festival coverage for the truly worthy. Let me just tell you…AWFF is the hands-down winner of this category. Dropping $300 on a ticket for a food festival may seem steep, but the moment you step onto the Universal Studios backlot, you will consider it money well spent.

Universal trams took attendees through the studio’s various lots (including a Manhattan set convincing enough to make my senses tingle) on the way to what can only be described as some kind of Utopian world for foodies. There was a red carpet that led directly into a maze-like path where, at every turn, a renowned restaurant and its famed chef stood serving up master creations.

One of the first tables to greet guests belonged to Paul Prudhomme, the original king of cajun cuisine (sorry Emeril). When I was about 13, my grandma got me a cookbook by Paul Prudhomme–it was my very first serious cookbook. I became so starstruck when I saw him that I hovered around his motorized wheelchair for about 5 minutes before moving on. Sadly, I regret that I was too excited to say hello or taste his food.

After grabbing a map, I started on a journey that can only be described as a foodie’s dream come true. There is so much to bring you from this event, that I have decided to break it down into a few different posts.

First up, is my chat with Executive Chef Amar Santana of Charlie Palmer’s restaurant. Santana, who has been in Palmer’s kitchen since the ripe old age of 19, describes his own cooking as “fresh” and “not too heavy.” His style is actually pretty descriptive of Southern California cuisine–though, like he says, Cali fare is often much less adventurous than elsewhere.

For AWFF, Santana and Palmer teamed up with Fiji water to produce a dish that is right on board with Santana’s style: Saffron and Olive Poached Shrimp with Avocado Gazpacho. The shrimp were tender and moist, so that was easily my favorite part. Neither of these are particularly labor intensive, so I’m happy to report that I snagged the recipes for you! My advice is to nix the two tablespoons of sea salt and just sprinkle to taste. Enjoy! 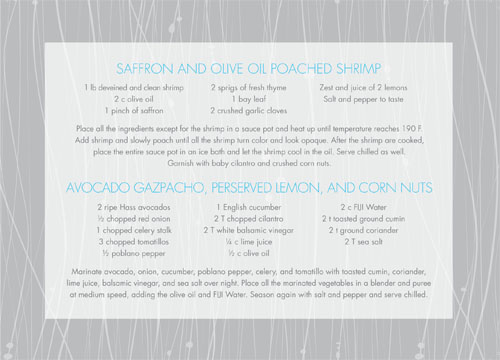 Let us know what you think of the recipe…