I don’t know if I’ve mentioned this before, but New York really effed my feet up. I mean, I think I remember way back when I thought my feet were actually not so bad. But yeah. Not the case anymore. The worst is trying to smooth out cracked heels or hardened areas. No pedi-scrub or foot buffer proved to be effective enough. I swear, I always thought in my head that there needs to be some sort of automated file made for feet. And now, I can pretty much say I was robbed of millions because Emjoi freakin beat me to it! 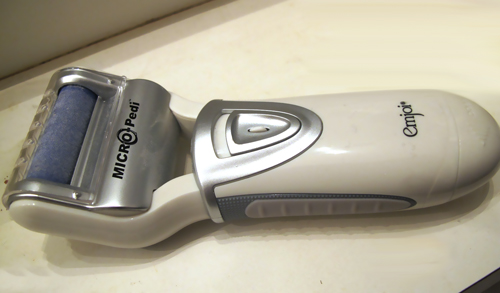 The brand, probably better known for its hair epilators, is now coming out with its Micro-Pedi this September. They sent me one to test out myself (I really hope they didn’t hear how badly I needed something like this — that would just be embarrassing). When they told me I was one of the first they were going to send the battery-operated foot buffer, I was elated. Mostly because I knew my NY-ridden feet would be the real test for how well it works.

First things first, it’s so easy to use: Pick the magenta roller for coarse or blue for extra coarse (I went with the blue), pop it in, and turn it on. It safely starts buffing away, and without any harsh metals to speak of. And can I just say, it does one thorough job. I was really impressed! I’m actually not even sure if I really need to go to the salon in search for the same smoothness. I used it around my heel, ankles, and balls of my feet and it left it so soft. I felt like I was granted my old pair of soft soles again. Amazing.

I’m totally a fan. You can pre-order one here for $39.95, or wait til it hits stores like Ulta and Sally Beauty in September. But man. What a ridiculously awesome find. Anyone else think they could use one too??