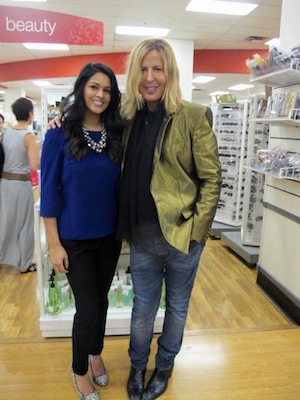 When I was invited to go shopping with Entertainment Tonight’s celebrity insider, Cojo, a million things were going through my mind (mostly, “What the HECK do I wear?” and “Will he make fun of me?”), but those worries were put aside rather quickly when I met the refreshingly energetic fashion critic who is in fact just as friendly as he is out-of-control funny. 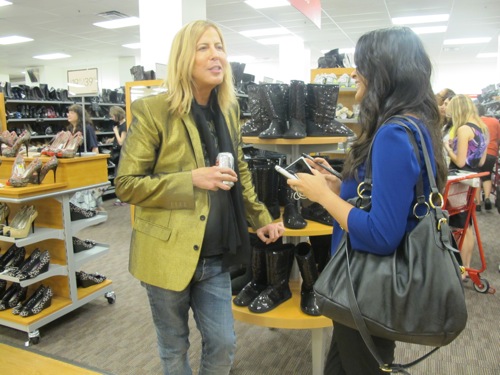 Now, if you’ve seen him on TV, you know he’s not one to hold back when he loves (or hates) something he sees. And you KNOW if he’s teaming up with T.J. Maxx and Marshalls as their style expert, he’s liking what he sees. So, in the middle of the ruckus that was Fashion Week, I slipped on the cutest heels I could find (these black and white coltskin ones, in case you’re curious), and marched on over to the T.J. Maxx on Sixth Avenue where Cojo was waiting for me in a gold Marc Jacobs blazer and YSL scarf…naturally.

I decided there’s no better way to re-hash this experience than with Cojo’s colorful quotes alone. So here we go:

– “I don’t believe in sacrificing for style. You can have style, you can have quality and you can get great deals — you have to know where to shop. That’s why I’m working with T.J. Maxx because of their off pricing, they’re able to get these amazing designers.”

– Cojo’s loving: leopard prints, color-blocking, cropped leather jackets (we found a beautiful Elie Tahari one for $199 at TJ!), navy, mixing feminine with edge (dresses with a leather or denim jacket). 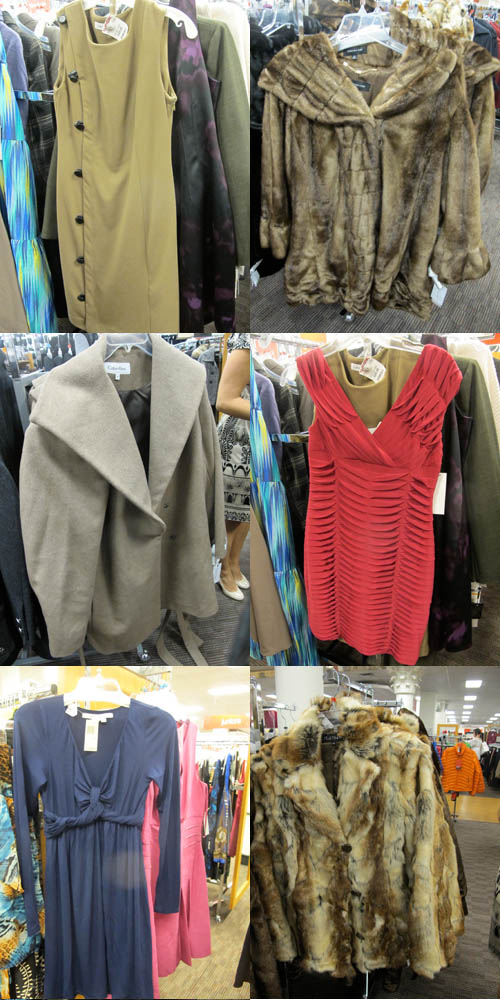 – “When you’re wearing clothes that you love that you feel good in, I’m telling you, you stand taller, your shoulders go backwards, your legs are longer…don’t cheap out, don’t buy crap. Buy good designer clothes,” he said.

– “I always looked at expensive things and found out how to make it work for me. It’s always about that one piece. A lot of other retailers are telling you to sacrifice here, buy these cheap things that will fall apart, I don’t believe in that.”

– “My job is to translate for every woman, how to make it accessible. If you’re liking a tweed, you don’t have to buy a $5,000 tweed jacket — you can find your own version of it.”

– What every woman should have in their closet: (1) A great black blazer. “I would spend a little extra on that black blazer. Spend something you’ll wear for ages, and you’ll feel good in. Like, ‘Oh, that’s my good black blazer.’” (2) A pencil skirt. “It looks great on lots of shapes.”

– Celebs who are killing it on the red carpet: “Emma Watson. She’s a breath of fresh hair. I think she’s so chic.”

– “I’m obsessed with J. Lo. She just gets it. She’s gutsy, she has balls. She’s glamorous. She reminds me of the old movie stars where she will not leave the house unless she has the full on hair, the lashes.”

– “J. Lo can be a movie star or can really be street on your ass. J. Lo has two different accents: At the Oscars, she’s like a lady, but at the Grammy’s, she’s all, ‘Imma cut you!’” 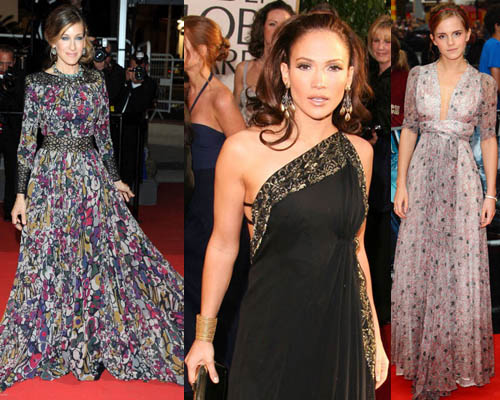 SJP, JLo, and Emma Watson -- some of Cojo's favorite stylistas

– “My Hall of Fame of Worst Dressed: Nicole Scherzinger. I can already tell she’s a fashion tragedy. Everything she wears. She looks like she’s in Prince video. I see it coming like the meteorite about to hit the planet. She’s an awful dresser. All the pictures I see, I’m like Victim! She’s gonna be bad.”

– “Some people say I’m mean and I’m a harsh critic – I’m not. Part of the job of being a celebrity is how you dress and your image. If you don’t know that, you’re dumb.”

– “I’m not into the Kardashian look. I think the look is aging. I think Kim is beautiful, she’s a gorgeous girl. But that look is really getting old. The tons of makeup, that too tight dress. We’re moving in another direction. Trust me, we’re moving into a polished, lady-like, refined look. That’s why we’re seeing so much chiffon this season, doming sleeves, chic pencil skirts. What I’m seeing on the red carpet in terms of the best fashion is that chic is back. So those Kardashians, they represent something very flashy, very obvious. The micro minis and the bandage dress and the hair, the makeup, the extensions – just too overdone.” 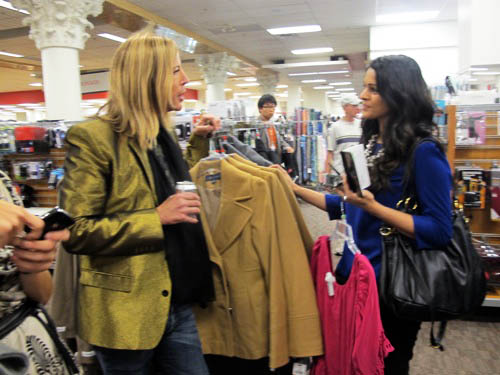 – “Victoria Beckham, I will live, breathe – I LOVE Victoria Beckham. I love her whole thing. I don’t find her accessible, she has that snobby thing going — she’s not Sarah Jessica Parker, who’s adorable. You want to pinch Sarah Jessica’s cheeks, I love her up and down. But, and I don’t use this word often, Victoria really is fierce. I love her style. She should get an award of honor, a special medal from the White House for wearing 7 inch high heels when she’s pregnant or when she’s just had a baby. I never liked her, I used to think she was vulgar. But as she’s aged, she’s got something, she’s got a certain charisma. I’m into her.”

– “At the MTV Awards, Miley Cyrus was wearing the ugliest leopard, turquoise dress. I wanted to call her and be like, ‘Miley, you should have just put a little Stella black dress on!’”

– “The easiest celebrities to speak to about fashion are my adopted twin sisters, Gwyneth and Sarah Jessica. I’ve known them long enough to just say their first name. Gwyneth loves fashion, she knows fashion, she’s interested, she’s passionate about it, she’s excited by it, and she has incredible taste. She’s got Cojo Style. She wears great labels, she’s very high fashion, but she’s confident. SHE’S wearing the clothes. Even when she does avant-garde or edgy, it still got a chic thread to it. I’ve seen her wearing edgy McQueen, and all kinds of Stella and backless dresses, but there’s something still chic about it. She’s got that magic fashion charisma.”

– “I think the word icon is so overused. Somebody sent me a press release saying Kim Kardashian is a fashion icon and I had to be hospitalized. I got rickets. I got physically sick. I think the word style icon is way overused. Style icons are Grace Kelly, Audrey Hepburn, Jacqueline Kennedy Onassis…those are style icons. A once-in-a-lifetime person who captures a moment. I wouldn’t call Gwyneth or J.Lo or any of these people style icons – maybe Sarah Jessica. Carrie did so much for the culture. It was a whole new approach to fashion. People try to fake downtown but Carrie really was downtown – crazy shorts with heels, polka dot turban, there was something very daring, very authentic, and very real. New York was the co-star. Carrie really dressed like a quintessential hipster downtown girl. That to me would make her a style icon.”

Getting distracted mid-interview with this Betsey Johnson leopard print jacket he found!

– “Tom Ford is a movie star. I’m not obsessed because I would not have a gorgeous boyfriend for any money in the world. It’s all about me. I would have a mouse-y boyfriend with money who knows how to rub feet and is all about me. Tom Ford honestly is a movie star. Like a Cary Grant or Tyrone Power or Gary Cooper. He’s got SUCH charisma in person — you literally swoon when you talk to him. He’s got the greatest quality of all: he’s friendly. Tom doesn’t have that grandness, he’s actually warm and lovely. A movie star from the golden age of Hollywood — Fred Astaire maybe. He should have been in a 1940s movie.”

– Coincidentally, the same day I met Cojo, he had just taped a segment for Rachael Ray! I asked him if he consider himself a foodie: “I’m not a foodie as a matter of fact! I’m more snobby about clothes. I’m a label whore but I’m a very meat and potatoes guy. I love food, I can eat the house down, I can eat anybody under the table. But I like peasant food.”

– Does he cook at all? “No. The problem is I’m always on a diet because I need to look like a supermodel on the red carpet and I live in Hollywood, and I’m gay. And gay men have these abnormal bodies. These gay men! They marry your waistline before they go out with you. I’m not into that at all, but I do have to watch my weight. I like pizza. Let’s go to Little Italy, I want spaghetti and meatballs. I’m not a designer foodie. I go to so many chic dinner parties, it’s like a piece of sh** on a plate. Like here’s a little piece of nothing with a dot of sauce and a little pea on it – I’m not interested in that at all. I want food, I want BREAD.” 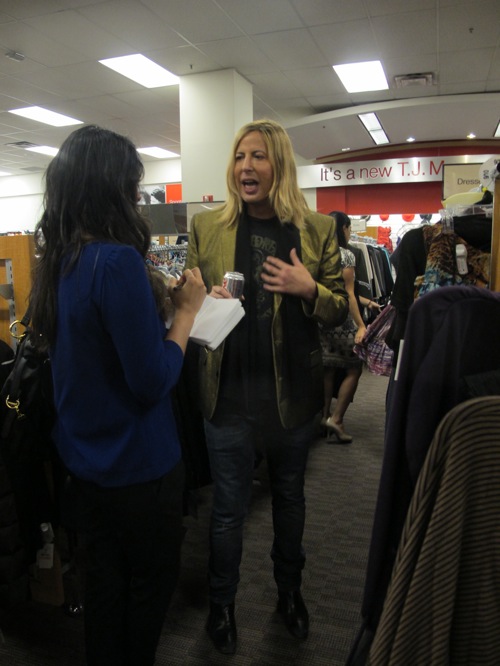 – “Beauty and food, they are both for the senses [Editor’s note: HELL YEAH!]. I love makeup! I think I’m a frustrated makeup artist. I think if I didn’t become a young legend, I would be a makeup artist. I love trying makeup all the time. I’m completely obsessed (and tell them to send me the whole collection because I bought it retail at Barneys): Chantecaille. I just discovered their dual powder. It’s perfect if you don’t want full on foundation, but you want coverage.”

– “Always look for expensive details. When I do makeovers, the people are wrecks. Their hair is fried – it’s like go and get a good shampoo, get a good hair mask, get a glosser, get your brows trimmed…look polished! That’s the secret. That’s why celebs look so good.”

Whew! Clearly, Cojo is not afraid to speak his mind (and no, he didn’t make fun of me so I can assure you he’s NOT a mean person). There’s a reason he picks on celebs he says, and that’s because they have no excuse NOT to look good on the red carpet. Everyone else? A stylish outfit can be staring you right in the face at off-pricing stores like T.J. Maxx. After a trip shopping with him, I also realized why he’s so good at what he does: he has a clear sense of how to make the most fabulous outfits out of one key piece and can paint the most fabulous vision with just about anything he picks out off the racks as he did for me. I had so much fun hanging out with him, I had to hug him twice before I left. And Cojo’s parting words to me? “Add me on Facebook!”