Ok, I’m not sure how this will sound but it’s the truth: When I walked into Townhouse Spa last week for the launch of the new Venus & Olay razor, I’m pretty sure I stopped mid-sentence while talking to my friend, Valeria, when I caught sight of the disarmingly beautiful Chrissy Teigen to comment as follows: “Woah. Her legs are out of control.” Clearly, it’s not hard to see why the brand decided to partner up with the Sports Illustrated model on their revolutionary new razor. But more than that, Teigen is just as much a guy’s dream girl as much as she’s a girl’s girl, I learned from talking to her. She makes you feel instantly comfortable, and not to mention, leaves you laughing uncontrollably — the girl is hilarious! 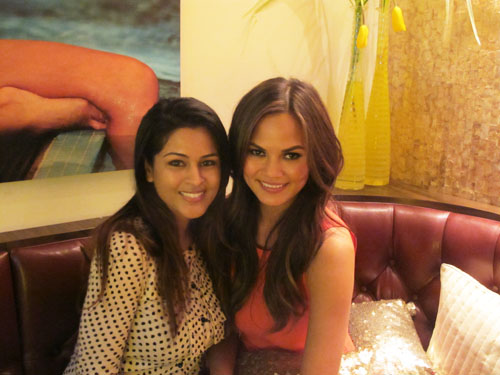 Me with Chrissy Teigen. I need to really stop taking pictures next to models.

This is the first time Venus & Olay are pairing up to come out with their unique five-blade razor. The ergonomically designed razor contains Olay moisture bars infused with shea butter (and no shave gel needed! Just wet for a light lather). Teigen, who just recently got engaged to longtime beau, singer John Legend, says she’s an ardent “twice-a-day” shaver. She waxed poetic on her love for the new razor:

“I’ve been a Gillette girl for so long,” Teigen said. “Like I used to steal my dad’s razors. Now obviously I’m a Venus & Olay girl, I don’t feel the need to use a men’s razor anymore. With this one, you really do get a smooth, close shave which is really important to me because I can’t afford to have nicks on my legs. I know Photoshop exists but I prefer if they didn’t zoom in and touch up my blood [laughs].” During long photo shoots, Teigen said they would have a six-hour break where “the guys were gone surfing, and I’d be up in my hotel room to shave…again.”

Teigen added that she has to control herself from holding the razor up to her nose every time she has it in her hand (“it smells like crème brûlée!” she exclaimed…an analogy I would totally expect from a food-obsessed cook like herself! Case in point: she says her next dream collaboration would be for a burger commercial!). 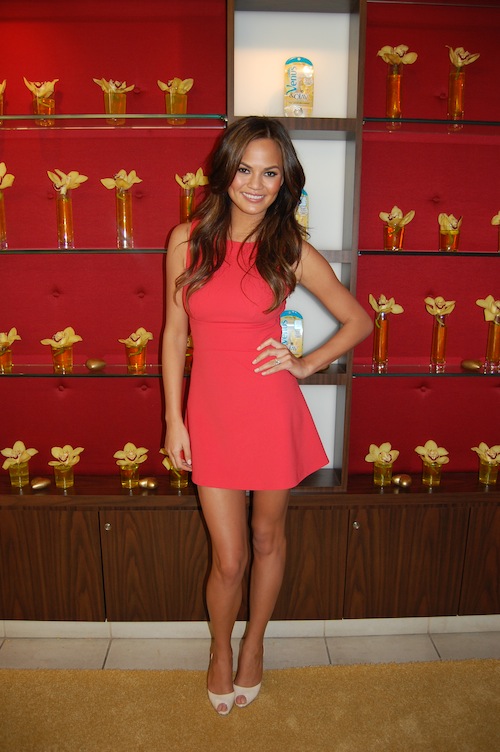 After getting a little bit of pampering ourselves to manis and pedis, I was so excited to sit down and talk to Teigen (a self-proclaimed foodie and author of her own food blog, So Delushious!). With my feet still wet from my pedicure and nestled in my spa slippers — she didn’t judge (out loud) — I caught up with Teigen about everything lovely and delicious:

Beauty and the Feast: I love that you’re a foodie, and I’m really obsessed with your blog!
Chrissy Teigen: Really? Aww, but lately I’ve been so down. I always tell people go to the old posts, I used to be funny! Oh, those were the days… 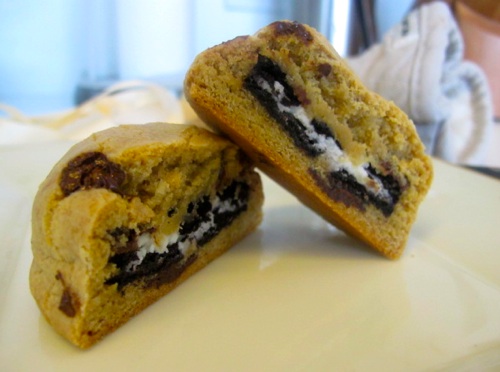 BATF: The oreo-cookies stuffed chocolate chip cookies?! That was genius!
Teigen: It’s funny, I’m actually not a sweets person at all. I didn’t think men would be either, but I made those cookies for a bunch of dudes watching football and they like, lost it!

BATF: Where did your interest in food stem from?
Teigen: It started in highschool. The dream was to go to culinary school, but it was so expensive, like $50,000 per semester. My dad was retiring at the time, and I didn’t want to be a burden on anybody to pay for that, especially if I wasn’t going to be a chef. I never had dreams of being a chef, I just wanted to learn how to cook. I’m so blessed to have the lifestyle where I get to travel so much, but it’s SO nice to be at home where I’m comfortable in my own kitchen. Whereas my days revolve around being insecure or being mad about something, or sad about something, when I get to actually cook everything goes out the window. It’s like therapy. I’m sure the 10 glasses of wine help too!

BATF: I saw that you and your fiancé [John Legend] cook together too! Is he a good cook?
Teigen: He’s a really good cook! He’s so great about it and so meticulous that he completely reads everything. Me? I just look over and I’m so messy. And I’m one of those people who needs a clean home or else my mind feels dirty. So, I’ll cook these crazy meals and there’ll be dishes everywhere, and in the morning I hear the faucet on, and I know he’s cleaning. Sweetest. Thing. Ever! So I cook, he cleans. 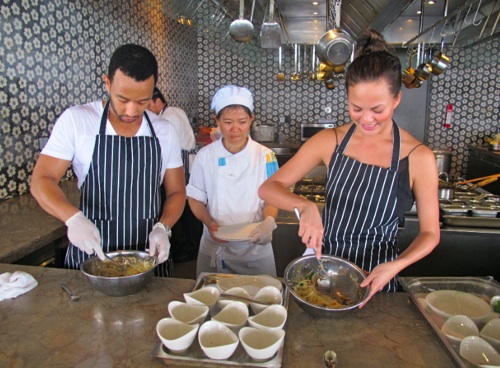 Chrissy taking a cooking class with her fiance, John Legend. Source: So Delushious

BATF: Was he always a foodie like you?
Teigen: He always loved food, but I definitely I think I helped the process a lot. He is obviously in the limelight and he has to stay in shape…and I like making really hearty food. Poor guy has to eat it all, or else I’ll feel bad and make a little pouty face and ask “You don’t like it??” So he eats everything. But we’re also pretty obsessed with restaurants. I love having three-hour dinner at a restaurant pretending I’m Padma, critiquing food–but not having any idea what I’m talking about [laughs].

BATF: What are some of your favorite restaurants in the city?
Teigen: We live a block from Degustation. Have you been there?

BATF: Don’t worry I won’t publish where you live.
Teigen: Oh it’s ok, everybody knows. My apartment’s for sale. People just come and stare at it, and I’m like, “Hmm…you’re not buying it, are you?” But yeah, Degustation is awesome. It’s a small little place, there’s only seating at the bar. It’s all tiny bites. We go and get the tasting menu. I think it used to have a famous 20-course menu. Le Bernadin is one of my favorite restaurants in the world, but this place really gives it a run for its money. It’s so weird because you’ll literally have 10 courses, but you’re not full, you just feel great. Everything has such thought and care going into it. They’ll be like, “A truffled scrambled egg set in an egg shell with mousse!” And you take one bite and you’re like, this is amazing! It’s a really awesome place.

I also love Pulino’s. I’m always there. I’m like a by-myself-eater. One of the things that’s really cool about New York is you don’t have to feel like a loner. I feel like in LA, if I do that, everyone’s like ‘Eww…nobody likes her.’ But in New York, it’s almost like a confidence thing. 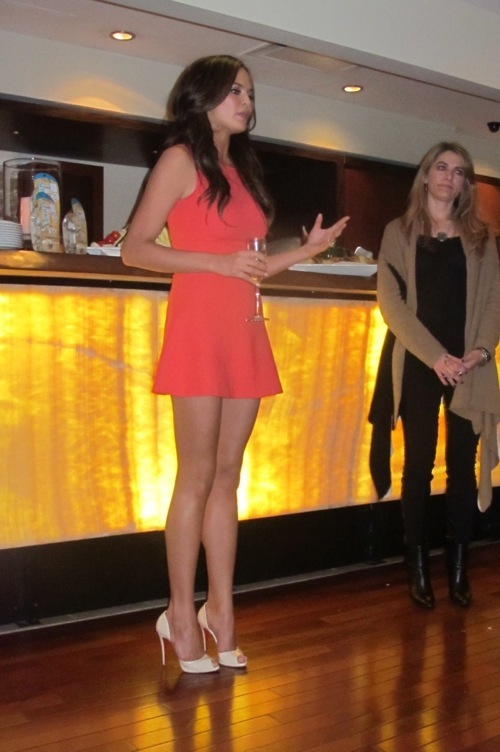 BATF: I have to say, I’ve seen a lot of models but holy crap…your legs are really incredible! How do you keep them looking so perfect?
Teigen: Nothing is as flawless as it looks. There are [beauty] secrets that go into everything, it’s crazy. If I didn’t have a great tan right now and body makeup, I literally have bruises and the whole thing [Editor’s Note: This is a lie, her legs are gorgeous]. For me, I think I was just lucky with my long legs. Even though my mom’s a petite 5’2, she’s all legs. I’m also obsessed with exfoliating…it doesn’t even have to be scrub, just a washcloth. When I’m shaving, I don’t feel clean without literally wiping my leg after every single stroke. I must feel it. I’m like a freak about it. 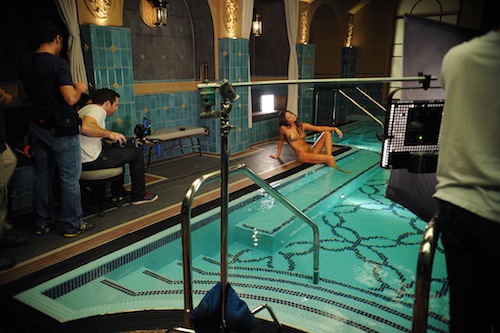 Shooting for the Venus & Olay campaign

BATF: What’s your secret to keep your skin glowing?
Teigen: I’m not a big water drinker, but I’ll never notice a difference in my skin quite like after you really drink those 8 glasses of water a day. That’s a ton of water, but everytime I force myself to do it, I wake up feeling so much better the next day. I’m a morning person for sure, like I’m mentally awake but my face takes a while to catch up. Water is the only thing that helps!

BATF: Are there any places in the city you go to to get pampered?
Teigen: I’m so freaking lazy, everywhere I go is right by my house! I go to Great Jones Spa. They do really, really awesome facials. I’m obsessed with extractions and they do great extractions there.

BATF: Ok, I’m veering a little bit but I’m really curious – what’s your favorite John Legend song?
Teigen: Right now honestly, I absolutely love Tonight (Best You Ever Had). I think it’s called demo-itis or something—when you fall in love with the first version of the song that you hear before the studio produces it to make it radio-friendly—but I really adore the regular, acoustic version of Everybody Knows. And his song, This Time, the one where he’s just on the piano. I really fall in love with those first piano versions before anyone messes with them. And I’m so sad I don’t get to have them on the CD! It’s so funny because I remember telling [John] when Green Light came out, his biggest single ever, I was like ‘Oh. Yeah. This is not gonna go anywhere.’ I just thought it sounded ‘not him’ to me for some reason? And then it was his biggest song. He got a freakin award for it. And now he doesn’t trust me with anything…but…I still think I have good taste [laughs]. 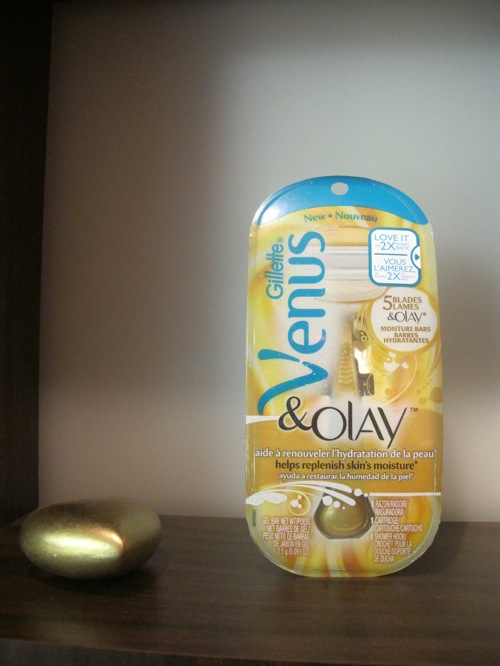 BATF: Finally, what does it mean to you to be Venus’ new spokeswoman?
Teigen: This sounds so cheesy, but we [as models] truly are presented with a lot of stuff that I don’t buy or believe in. I would feel stupid talking about something I don’t love. I’m just the type of person that you can tell if I love something, and if I don’t, it comes off very fake. First of all, these are not only the most amazing group of women to work with ever (which is very important to me because I don’t get to work with a lot of women—everything I do is devoted to men!), but this truly is a product I love and believe in. I really use it, I really love it. I love everyone who’s involved with it. It feels like a family – I get engaged, I get flowers from Venus! I really am happy to represent them.

Thanks to Chrissy for taking the time for such a wonderful interview! You can follow Chrissy on her hilarious Twitter rants at @ChrissyTeigen, and be sure to check our her blog, So Delushious!.

The Venus & Olay razor is the first ever beauty partner of the Sports Illustrated 2012 Swimsuit issue! The razor will be available for purchase starting March 15 for $10, but you can join in on the pre-sale on Facebook HERE.

3 thoughts on “Swimsuit model Chrissy Teigen on food, her fiance John Legend, and partnering up with Venus & Olay!”