A couple of years ago when my friend, Priya, and I were planning our trip to Prague and Berlin, she mentioned we should try to check out a “dark restaurant.” It was the first I had ever heard of its kind. These pitch-black restaurants (many with a blind wait staff) were a completely different approach to dining. I read more about them recently: “The concept of purposefully eating in complete pitch-black dark originated with Jorge Spielmann, a blind clergyman from Zurich. When guests ate dinner at the Spielmann house some would wear blindfolds during their meal to show solidarity with their host and to better understand his world. What Spielmann’s sighted guests found was that the blindfolds heightened their sense of taste and smell and made their dining experience more enjoyable. That gave Spielmann the idea to open a dark restaurant, which he did in 1999.” 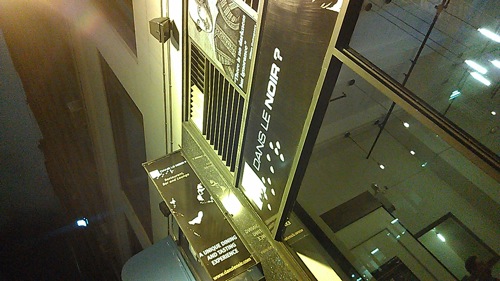 And similar restaurants began popping up around the world. Unfortunately, Priyers and I didn’t get a chance to check one out in Germany as planned in our short trip, but we always talked about how we wished we had. That’s why when Dans le Noir? opened in NYC, we were psyched to check it out together. The chain (which means “In the Dark?” in French), first opened in Paris in 2004, and grew to be so popular, it opened up more branches in London, St. Petersburg, Barcelona, and now NYC. I wasn’t sure what to expect from the restaurant, but I was hoping it would do the experience justice to what I pictured in my head…it went even beyond that

The first order of business is picking from four genres of pri-fixe menus: Vegetarian, Meat, Seafood, or Chef’s Surprise (which is a variation of all three menus). This is also the time you tell them about any food allergies and restrictions so they can make necessary adjustments. Since you’re dining in the dark and not supposed to know what you’re eating, they don’t tell you exactly what you’re getting in your three-course meal. Next, you sign a waiver which basically says you understand you’ll be in total darkness and seated by others you might not know, and they’re not liable for any injuries you incur as a result (I know, scary). 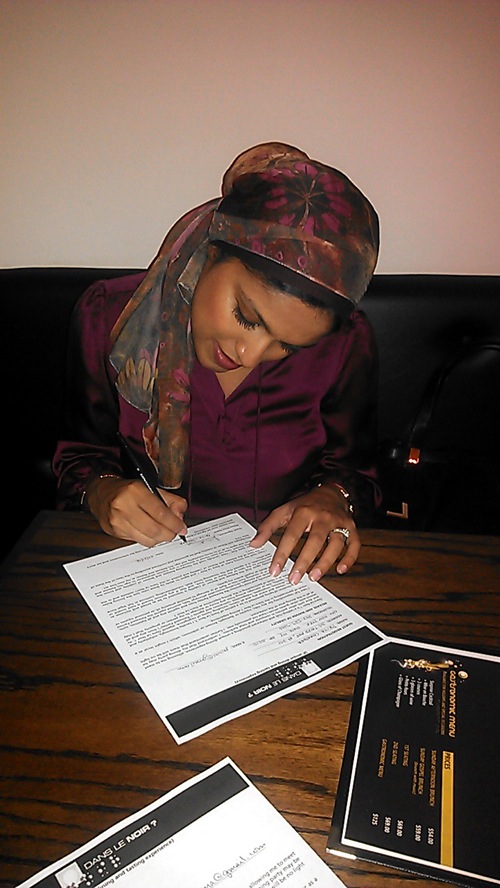 Then we were taken downstairs to a locker room where we had to put all our belongings — purses, watches, phones. Everything. I’m just realizing how creepy this sounds — being stripped of your belongings before eating a mystery meal in the dark. There’s more… 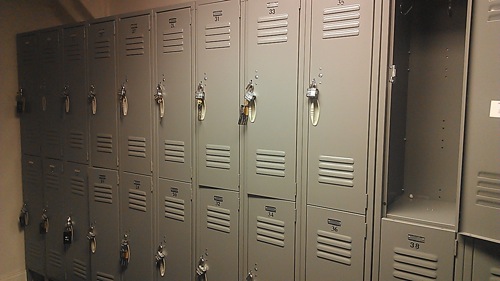 This is one of those places where it’s imperative that you’re on time (brown people, I’m looking at you). We are to be led into the dining area as a group, so when everyone’s ready, we are lined up in two rows and you have to place your hand on the shoulder of the person in front of you (which is most likely someone you never met, since you’re standing the opposite row of the person you came with). Then our waiter (who is blind, by the way, as most of the wait staff here), adroitly guides the pack to the dark room. 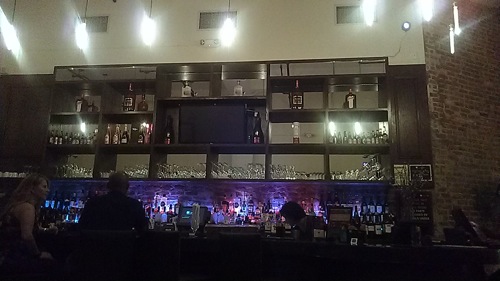 Bar area outside the dark room

I don’t know about you, but I can’t remember the last time I was in a room that was pitch black. Even at night when I turn the lights off in my room in my room, there are still remnants of lights peeking through my window from the streets. So the immediate feeling is a lot of things: a little bit scared, strangely claustrophobic, even vulnerable (it’s New York City, how am I supposed to be sure we’re not going to be locked in here and/or taken hostage at some point??). Plus, my hand is resting on someone I don’t even know (I learned later, his name was Michael, and he was celebrating his birthday with his wife). And how am I supposed to trust this guy I just met in the dark to not lead me into a ditch because clearly this place is meant to kidnap people, not feed them. Right?!

But I did instantly smell the aroma of cooking which almost warms the place as you walk in. Soon Michael is led to his seat, and since I’m the last in line this meant I’m temporarily left alone in the dark until our waitress, Maria’s, soft hands lead me to my seat. When I sit down, I feel around for my plate, my napkin, my utensils, and glass. And for the first time I feel a little comfortable. I felt odd calling out to Priya — I had no idea where she was — but soon realize she was sitting right across me. We were passed a pitcher of water, and Maria tells us the way to pour our water was to stick our finger into our glass to make sure it doesn’t overflow. I get pretty good at this.

Now I told you about all the somewhat frightening parts of the experience, but there were easily many fun parts about it to. For one, all your insecurities and shyness are thrown out the door. It’s easy to talk to everyone, and chime in on other conversations without getting a weird look (well, maybe you are but you won’t be able to see so who cares?) and it very much becomes a communal meal. At Priya’s mention of my blog to the nice couple next to us, I would usually find myself squirming in my seat, but didn’t even flinch. “Oh did you say you’re a food blogger?” a man asked us from seemingly a few seats away, “You should try Armani’s brunch — it’s amazing!”

People make jokes (“Guys, wouldn’t it be funny if we’re really just in a Febreeze commercial?”), people break and spill things, some say they can’t keep their eyes open and might have — they’re not sure — even taken a brief nap, and most agree that if this was life, there would probably be no wars. Think about it: you’re practically dependent on other people to help you get around (or pass the pitcher), and you can’t see anyone, only talk to them about yourself instead of finding reasons to disagree on at least superficial levels.

And the food! We first get a basket of warm bread, and on to the appetizers. I’m not sure what I’m biting into and ten seconds in, I put my utensils down and try feeling for my food. Hey, no one can see me eating with my hands so why not? I taste all the parts to my food, a hint of rosemary, something I think is a samosa, roasted potatoes, another our new friends guess is fried green tomatoes and mozzarella. Our waitress asks us after if anyone used our hands (how does she know?!). People start slowly mumbling confessions and I’m surprised I’m not the only one! “Ninety-five percent of people use their hands to eat in the dark.” I guess without our sense of sight, we rely heavily on all our other ones, including touch.

Our entree and dessert is just as splendid as the apps. I notice how much focus is on taste and textures (and thanking the Dans le Noir chefs for not dousing anything in messy sauces). Of course, I wish I could have taken pics, but obviously I couldn’t, and although we were shown a menu of everything we ate at the end, I wouldn’t want to spoil it for the rest of you ;).

This is a one-and-a-half hour adventure I think everyone should do at least once in their life. It’s really not just dinner, it’s an experience and a fun way to “look” at the world if you really couldn’t.

REPORT CARD
Meal: Dinner
Price: $$$ (Our meal would have cost us $124 plus tip — that’s total for 2 people for a 3 course meal, but we found a voucher on Bloomspot for $84 that we paid before hand and tipped at the restaurant)
(Out of three stars)
Ambiance: This is kinda hard to rate when you couldn’t see anything…
Food: ***
Service: ***
Would I go back?: I think everyone should go at least once…I probably couldn’t often or regularly have meals in the dark like this but I wouldn’t mind going back for more.

2 thoughts on “Dining in the Dark at Dans Le Noir? in Midtown”