Not going to lie, when I set out to meet Under The Gunn/Project Runway’s fashion guru, Tim Gunn, I was equal parts excited and nervous. Excited because, well it’s Tim Gunn and just by watching PR you just know he’s the designers’ biggest cheerleader. Who wouldn’t want a fashion mentor like him? Nervous because, well, it’s TIM GUNN and what are you supposed to wear? Also, there was that little part of me that was afraid he’d ruin my exceedingly favorable image of him from the shows. Luckily, I quickly found him to be the most delightful, warm human being to interview which made getting out of bed at 7 AM on a Saturday morning all the more worth it.

Me with Tim Gunn!

We first got a tour of some of the new products from Crest, Olay, and CoverGirl from P&G’s North American beauty ambassador Marsha Chilko with Gunn. This is also when he told us he’s “all about skin products,” and said he’s been using Olay for years himself (which he discovered once he ran out of his expensive brand of cream and found Olay from a gift bag he received — he’s been hooked since). Afterwards, we sat down with Gunn to talk about how to achieve some of his favorite spring looks AND some juicy inside scoops about the show. Read on: 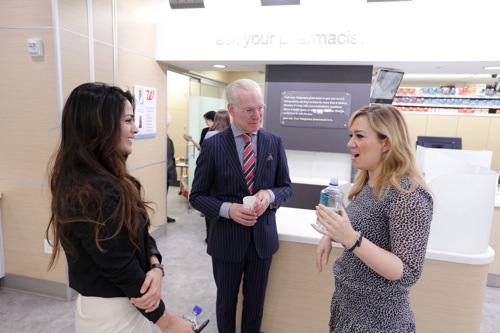 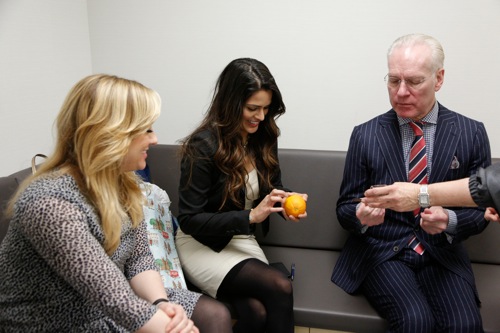 Beauty and the Feast: I feel like for a lot of people, fashion can be really intimidating. As an expert, what are your opinions on navigating that for people who feel this way?
Tim Gunn: The wonderful thing about American fashion today in particular is that it used to be so narrowly defined as an aesthetics swath. What I love about fashion today is it’s so incredibly diverse you really can dress however you want to dress. The only limitation I find is size, especially for women who are petite and those who wear larger than a size 12. it can be very challenging. I’m set on helping fix that. You just need to be who you are. Clothes are a message to how the world perceives us. How do you want the world to perceive you? Whenever anyone says to me ‘that’s so shallow, that’s not true, people don’t really judge other people based on how they’re dressed.’ I say, if someone you don’t know comes into a room, what’s the first thing you notice about them? Probably their gender, and second how they’re presenting themselves. It’s not just clothes, it’s also grooming. I see grooming and clothing as inextricable partners. It’s about accepting responsibility for it. We need to be comfortable in our skin, literally and metaphorically. Don’t let this intimidate you, I’m the anti-trend guy. The trend is only good if it works for you.

BATF: Speaking of trends, are there any trends that you absolutely abhore right now?
Gunn: I’m horrified that the gladiator sandal is back. I was on Good Morning America with Nina Garcia and was asked us what should every woman go out and buy? Nina declared the gladiator sandal, and I just had this visceral reaction. I was like gladiator sandal? Most woman don’t have time to lace that thing up!

BATF: What are some tips for a fashion novice to creating the best look possible?
Gunn: It’s useful when a woman or man have a fashion mentor. That person should have your coloring, hopefully have your physique. It’s someone you can look to and ask well what would she wear? If she doesn’t have that, it will look completely different on you. The look needs to speak to you and need to you need to be who you are.

BATF: Do you have any guiding principles for dressing?
Gunn: The key to getting our fashion right has to do with three priciples: 1) silhouette, 2) proportion, 3) and fit. When they’re in harmony and balance, you’ll look great no matter what you’re wearing. People ask to de-mystify it, so silhouette meaning your shape. Show off curves. Proportion: I always say, look at yourself as a series of thirds from your shoulders to your toes, and dress according to thirds. If you think about a dress for instance, 2/3 on top, 1/3 on bottom. Top and pair of pants, 1/3 on top, 2/3 on bottom. Don’t cut yourself in half. That’s why men who wear their shirttails out, they look schlumpy because their cutting themselves in half. And fit, have clothes that skim you. You don’t want things that are too tight, or too much volume. If you’re wearing separates, you can have slimness in one, volume in the other. Let your viscerous speak to you. If your viscera says I don’t know about this, it’s probably right. 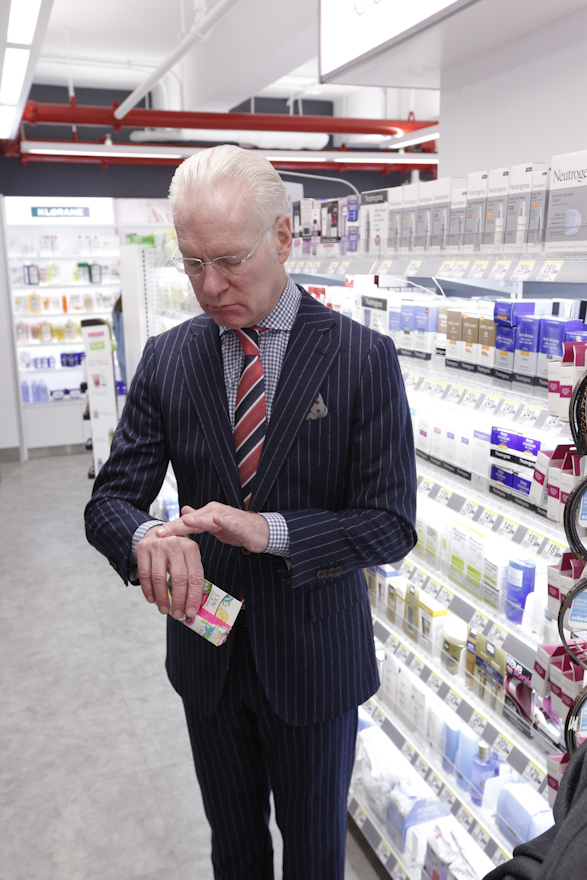 Trying on some of Olay's Illuminating cream

BATF: What are some things every guy should have in his closet?
Gunn: A suit and tie. I can’t tell you how many guys in New York don’t have a suit and never had a tie. It’s about respect, respect for yourself first then everyone else. Providing the fit is correct, which is the whole other issue with men. So frequently their clothes are one or two sizes too big. I mean, what guy doesn’t look great in a suit when it fits perfectly?

BATF: Can you tell us anything about what to expect from Under the Gunn this season?
Gunn: It was an incredibly wonderful experience to make the show. You’re gonna see the mentors are on rollercoaster, and you’re going to see the biggest outburst from me ever. Ever. I lost it. If they keep it in, it’s going to be in the Marvel challenge. I LOST it.

BATF: Wow! What set you off?
Gunn: I only want the designers to succeed. I only want their work to shine on that runway. Not only was the designer, I felt, derailing him or herself (I don’t want to give away the gender), but the mentor was supporting it. I was like, ‘Wait a minute, this is not going to be well received by the judges. In fact, this could send the designer home, so stop it.’ And actually, it was makeup related! The blowout happens in the makeup room. Be on the lookout for it.

BATF: I have my DVR set. Do you have any advice for young designers?
Gunn: No matter what, if they don’t have an unbridled passion for it, they shouldn’t do it. It’s too difficult and daunting. It’s the love that will keep you in it. If you’re knocked over and you stay there and you whine and cry, not the industry for you. You need thick skin. Doesn’t mean you can’t be a sensitive little marshmallow, but you have to have a very thick crust, and I believe that’s acquired. I don’t think anyone comes in with it. In any creative area, you have to have a point of view and you need to know who you are. It’s about passion and love, it’s true with whatever we do in life.

BATF: I’m really curious, how does it feel to coin the catchphrase, “Make it work”?
Gunn: Who knew, right? I used to say make it work in my classes for years. I couldn’t help myself on Runway. In the first season of show, I never dreamed I’d even make it to the edit, I thought I’d be on the cutting room floor because I was a consultant for the show. I was never intended to be on camera. Never. My role in the show didn’t exist. It was in no one’s in vocabulary. A little less than a week before designers arrived, producers asked how would I feel to be a mentor? I asked…well, do I have to live with them, cuz that would have been a deal-breaker. [laughs]

BATF: I really felt like your parts were some of my favorites because you can really tell you’re rooting for the designers instead of tearing them apart.
Gunn: Why thank you. I feel like I’m the voice of the people. I feel like generally the comments I make are what people at home are thinking.

BATF: What was one of your high moments from Project Runway?
Gunn: For me, season 1, episode 1 when we went to the grocery store. I’m watching Austin Scarlett fill up his shopping cart with ears of corn, and I’m thinking ‘this is pathetic.’ On top of the ears of corn, he piles all these bags of potato chips. And I’m like I understand the ears of corn, but why the potato chips? He’s like, ‘For the ride home in the van!’ [laughs] But that dress he created was so magnificent, I’ll never get over it. Ever. Ever.

BATF: For a fashion expert like yourself, who’s your mentor?
Gunn: Diane von Furstenberg has always been an incredible mentor. She’s always been there for me. She’s so grounded. She’s amazing. And she always says to me whenever I’m in an impasse, Listen to your own voice. Never lose your voice as an educator, it’s who you are, it’s what you are, and it’s what you do well, so why ever stray from that. We all have our moments when we need someone.

Thank you Tim Gunn for the lovely interview! And now you have a chance to win all of these products below to get ready for your spring look, courtesy of P&G and Walgreens! 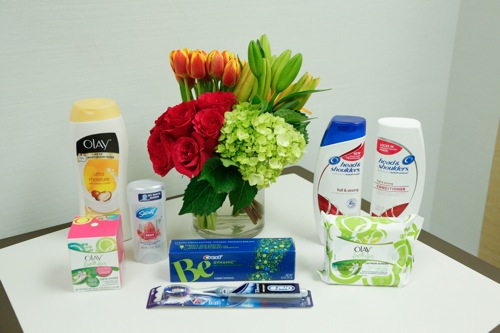 MAKE SURE to leave a comment below letting me know how you entered (either on FB or with your Twitter handle).This giveaway is US-only and ends March 21st at 11:59pm. The winner will be contacted directly. Good luck! 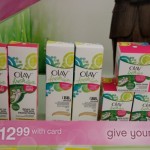 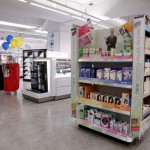 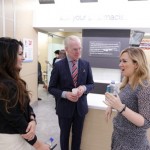 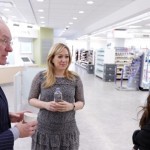 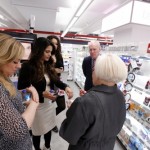 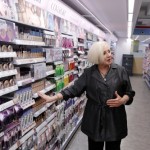 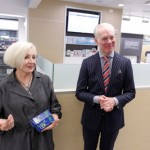 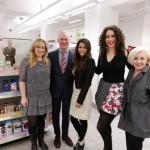 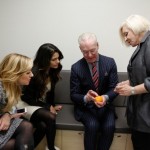 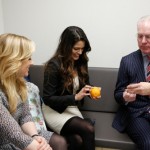 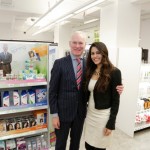 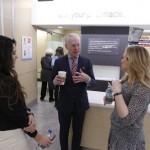 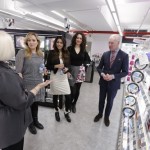 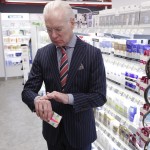 Trying on some of Olay’s Illuminating cream 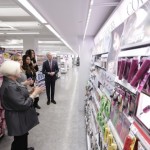 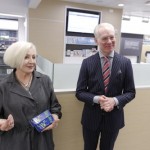 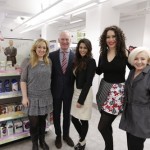 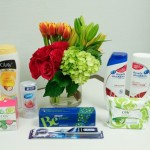 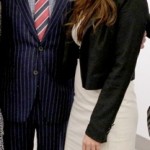 Me with Tim Gunn!

18 thoughts on “That time I met Tim Gunn + a Walgreens P&G Beauty Giveaway!)”