It’s becoming a fun tradition to interview Los Angeles Lakers’ point guard Steve Nash about his annual charity soccer event, The Steve Nash Foundation Showdown, where NBA and professional soccer players come together to play a game on the LES (on the same field Nash plays pick up soccer games). Right in the midst of FIFA-fever, the event (TONIGHT in NYC) attracts fans from all walks and gives them a chance to check out NBA players outside of their usual settings. Now in its 7th year and recently helping raise awareness on child abuse prevention, Nash was game for some questions ahead of the event for BATF: 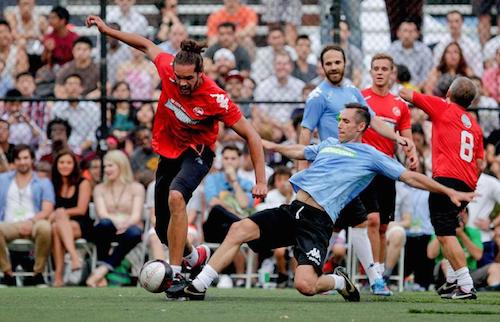 A shot from last year -- Joakim Noah and Steve Nash

Beauty and the Feast: Let’s get this out of the way first: Which team are you rooting for in the World Cup?
Steve Nash: My family’s English. I’ve always rooted for England, but they’re out. So I’d like to see Brazil do well in their home country.

BATF: When you’re watching the World Cup, what do you think about the sequence of events with the USA team?
Nash: I thought they did exceptionally well. I thought in some ways they were lucky to beat Ghana, but they were unlucky not to beat Portugal. If you look at it, they’re probably right where they should be, it just hurts when it’s taken away on the last tick [in the Portugal game], but I think they’re still in a good position.

BATF: Who do you expect to show up this year?
Nash: So far we have Dirk Nowitzski, Kyrie Irving, Giuseppe Rossi, and Thierry Henry to name a few.

BATF: Is there anyone who you’ve played against in the past Showdowns who you’d want a re-match with?
Nash: For me, as a grown up who still dreams of soccer and to who it’ss till special to play against professional soccer players, to just be out there with Rossi and Thierry Henry is just phenomenal.

BATF: What are you most excited for this time around?
Nash: I’m excited that Dirk’s coming! It’s his first time coming, he’s one of my best friends and to have him come and support means a lot to me. So I’m thrilled for him to be a part of it.

BATF: I know you’re doing a lot of work with children in the community. What do you relate to them about what life lessons they can learn from sports?
Nash: Sport is a fantastic mirror of life. The more kids we have participating in sports, the more they’re developing their skills, similar to playing a musical instrument, they’re learning a new language. I think it’s fantastic for their self esteem, learning characteristics of hard work, dedication, team work, learning how to win or lose, learning how to be a part of a group, a teammate, a leader — all those are qualities are basically the ingredients of life. Sports are a great way to teach all these values to kids.

BATF: When you first started putting these games together, were you surprised at the interest of fellow NBA players?
Nash: I think what’s cool about the event is for the soccer players, it’s fun to meet the basketball players, and for the basketball players it’s fun to play against professional soccer players. There’s a unique motivation for guys to get involved. Everyone who comes and plays has a blast because it’s a small environment right in the middle of Manhattan. It’s not only a great atmosphere but a unique experience for all.

BATF: Why did you choose to hold it in NYC?
Nash: I’ve lived in Manhattan for 10 or 11 summers now. I play on that park with one of the teams I’m on. It was a very natural and organic idea with a friend of mine thought up. It was just natural to have it on the park I actually play in.

BATF: What’s the status on your health?
Nash: I feel great right now. I haven’t been with limitation as far as my training. I try not to overdo it so that I can allow my nerves to settle down and be less irritated, and it seems to have worked so far. It’s hard to say once I begin the rigors of an NBA schedule again. I’m doing everything I can to succeed in that environment.

BATF: My blog has a lot to do with food, so I have to ask what if there’s anything in particular you’re most excited to eat while you’re out here in New York…
Nash: Well it’s hard to beat New York City for food! There’s so many options and amazing places– not just food wise, but atmosphere wise– it’s always special time of year for me to be here.

BATF: Is there a favorite restaurant you frequent while you’re here?
Nash: Lots of places. We live in Tribeca, so there’s a ton of places here. But one of my favorites is ABC Kitchen.

Thank you, Steve Nash, for the interview!

If you want to attend, here are the details:
WHO: Hosted by STEVE NASH
WHEN: Wednesday, June 25th 2014, 6:30 pm
WHERE: SHOWDOWN: SARA D. ROOSEVELT PARK located at Chrystie & Stanton in New York City

Check out stevenash.org/showdown for more info!