I was recently inspired by having lunch at Umami Burger, whose namesake burger uses parmesan crisp, to make my own for when I grill burgers at home. I totally experimented with this and it turned out delicious and is pretty easy to make. 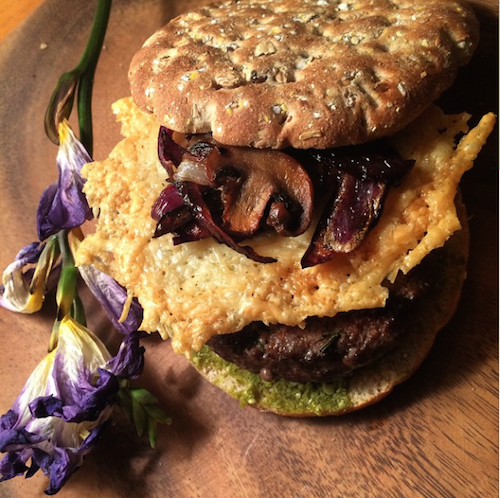 Start by pre-heating the oven to 400 degrees, which you’ll use to make the parmesan crisp.

TOPPINGS:
I heated up a tbsp of coconut oil over the stove, and cooked half a red onion (sliced). Remove and set aside, and then added sliced mushrooms and let that caramelize (you only need three sliced white mushrooms for two burgers). Afterwards I combined the onion and mushroom in one bowl and lightly sprinkled a little more pepper over the mixture.

THE PARMESAN CRISP:
The easiest part of all: I just put a heap of shredded parmesan cheese about the same diameter as the burgers on foil, and let it bake in the oven until slightly brown. Let it cool before removing. Tip: Use parchment paper if you have it. If you’re using foil, then grease it very lightly. I didn’t grease it, and was able to very carefully remove it off the foil but it would have been much easier if I just oiled the sheet a little.

At home, I always use Arnold’s 100% Whole Wheat Sandwich Thins. I toasted these first, and added a spread of leftover pesto spread to them. I originally wanted to mix the pesto with mayo to make it a little thicker, but I was out of mayo and didn’t realize til much later. It might be something you want to try though! Place burger in center, top with parmesan crisp and whatever condiments you want. Aside: I also sliced tomato to top the burger with which I totally forgot, but you can add whatever toppings you want to this.

The combination of the pesto, seasoned burger, parmesan crisp, and caramelized onions/mushrooms all added a fun flavor to this, but you can totally customize it however you want. I basically used whatever I already had in the kitchen myself!

PS I normally file away my kitchen experiments on Instagram (@beautyndfeast) if you want to follow me there too :).